Katie Russell, aka Wilderbabe, came to my rescue at the bus depot, her sparkly sunglasses and smile a welcome sight after the watchful eye of the security guard. We went to pick up Peter, who’d gotten in a bit late and grabbed a hotel rather than sleep on a bench. For weeks, Katie had been referring to Peter as “Peter the Irish.” It turned out that Peter is from Scotland. And he’s just as chatty as I am, so we make a good pair.

Because I was in such good company and still a little bit ill, I didn’t take a lot of pictures on our long drive from Wenatchee to the Wilderbabe Homestead in Twisp. But it was amazing to see such a different landscape than what I’ve seen before. All around us rose these craggy hills covered in the green sprouts of spring as we drove through orchard after orchard‒mostly apples‒and the farmers tied silver string like tinsel to the branches, and they set off flashes of light on the wind. 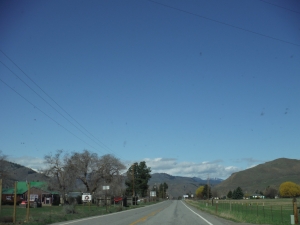 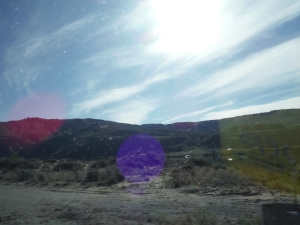 We stopped at a roadside market for some culled apples and they had the pond of my dreams. Just over the hill from the waterfall was the Columbia River, so it seemed to flow directly from it. It was so warm and inviting, I could have lain in the grass for hours, just listening to the water trickling and feeling the breeze. 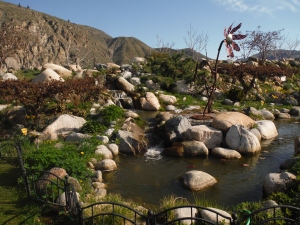 When we arrived at the Wilderbabe Homestead, we got the grand tour, including a meet and greet with our new animal friends: Kobe the dog, named after hotdog-eating champion Kobeyashi; Flint the horse; and Ike the donkey. Ike is the sweetest! We also met two more members of our tribe, Bartle and Kris.

The view from the driveway…

Peter and I took some time to strike camp and rest. I actually took two naps, to try to clear whatever had invaded my system.  Actualy, the first one wasn’t so much of a nap as a face plant onto my ground pad under the trees where I would later pitch my tent and nap again. I couldn’t eat, and it was a struggle to keep drinking, but it’s so dry here that you dehydrate quickly. 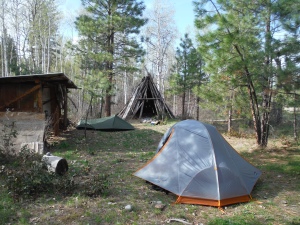 That night, Bartle and Kris cooked us some yummy rice and lentils with eggs, and a guacamole with apples and roots. It was covered in lovely edible flowers and roots. My stomach wouldn’t let me eat much, but it was the best guac I’ve ever eaten, and I could eat those flowers all day long.

When I tucked in for bed, I relaxed to the little froggies were chirping along the river bank, and then the owls sang me to sleep.