Blood on the Ground

Because of a lot of factors, it turned that the hunt during Buffalo Bridge wasn’t very good. So, the crew came back with some hides and other buffalo bits, but no meat. Because we have 10 very hungry hardworking people to feed in our little compound, and the two deer wouldn’t last all 3 weeks of the class. Katie arranged to get a ewe for us to slaughter, from a local farm. The farmer was giving her up because she hadn’t been producing.

The evening before, after everyone had arrived, we sat around a boiling vat of deer bone broth and talked about what each of our roles should be during the sheep slaughter. I had been thinking all day about whether or not I should volunteer to hold the knife. I knew I could process an animal that was already dead, but I wanted to know if I could actually end an animal’s life. Eventually, I’d like to have a goat farm, and slaughtering would be a part of that. Only one other person was interested in holding the knife, and I drew the long stick, so it would be me the next morning.

That night, I went to bed, my mind racing with thoughts about what the ewe would look like, whether I’d be able to produce a clean cut, how long it would take her to die, and if I’d feel guilty about taking a life, even if it was one that would be used to the fullest.

I fasted in preparation for what was to come. The fasting helped me clear my mind, and throughout the morning, I felt at peace with what was about to happen.

2,500 miles away, my grandmother lay in a box for a viewing, for the people to witness her dead body and accept the truth of its finality. I washed bowls and buckets clean, to hold her blood and guts, so that we could use every part. Then I sat near the bone broth sharpening my knife, waiting for the ewe to arrive. Everyone checked in on me, and saw that I was calm and deliberate in putting a sharp edge. I wanted her death to be as painless as possible.

While some folks dug a hole to catch the blood and prepared the ewe for slaughter, Kris taught me the most efficient way to make the cut. I was to hold her windpipe, slide the blade behind it until it went through to the other side, and then turn the knife to cut each side of the jugular. He said it would take a lot of strength to make it all the way through the neck. He would come behind me and make sure the cut was clean.

After I made the cut and the bleeding began, Peter would catch the blood. We embraced in anticipation, breathing together so that we could work in sync.

On a hilltop 2,500 miles away, my family members were embracing one another as they watched the hearse wind up the gravel drive with my grandmother in back, ready to be committed to earth.

The rest of our clan was holding down the ewe, who was struggling a little to get up. I knelt beside her and stroked her face, caressed her ear, looked into her eyes. Everyone thanked her in their own way for her life, her death, and her body that would nourish us. She calmed beneath my hands and her eyes cleared of the wild panic she’d had throughout her capture and transport to the homestead.

I moved to the other side of her and knelt at her throat. I could feel her breath as a part of mine mine. I felt for her pulse over the pit of open ground under her neck.

In the mountains of eastern Kentucky, my grandmother was being carried to the pit of earth that my brother had gone to dig the previous day.

Bartle took my place at the ewe’s head, and covered her eye with her ear, to spare her the fear of what was coming.

When I grasped the ewe’s windpipe and pulled it out to make room for my blade, all the sound fell away except my heartbeat in my ears syncing to her heartbeat beneath my fingers. I raised the blade and pushed it down, all the way through the ewe’s neck.

My hand guided the knife exactly as Kris had taught me, and I made the cuts to the jugular, then pulled out my blade and moved back. My vision went white as Kris went in to check the cut and Peter began to collect the blood. Though my heart pounded and my hands shook, I felt completely at peace.

Though she didn’t struggle, the ewe gasped for breath, in nearly the same pattern as had my grandmother the last time I saw her, one week before her final exhale.

The sheep relaxed, letting go of life far easier than most people can. I thought of my grandmother, squeezing my hand and telling me she was afraid to die. Someone said that it was the mercy of a prey animal, to shut out the parts of their brain that cause fear and pain as their end draws near. There is no such mercy for us.

The ewe’s blood flowed until it overflowed one bowl, then another and another. In the end, she gave just over 5 quarts of blood that we would make use of in so many ways, to honor her life, her death, our lives, and eventually, our deaths. I filled my hand with the flowing blood and drank, feeling her life become a part of mine.

I watched the ewe bleed out, gasping, during the hilltop service for my grandmother that she agreed to only in her last week. While my daughter and niece clung to each other in grief, my little clan gave me love and support, and thanked me for my part.

After 25 minutes of bleeding, we all felt the ewe’s final exhale. At the same time, I could feel my grandmother’s casket being lowered into the ground next to my mother, hear the exhales of wails and tears from over 2,500 miles away.

We all live, we all die. Life is what it is. We can hold on or let go, but neither will change this cycle.

Bartle painted my face with the blood, and I felt reborn into a stronger, more compassionate version of myself. My eyes are now fully open, and I am truly alive. 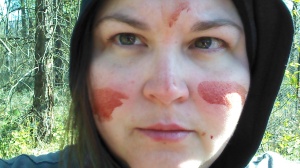