One of the great bounties we received from the ewe was her fat. But like all of her, it was some work to get it there. Everyone pitched in during the butchering, which included the task of separating all the fat from the meat and bone. On this ewe, that was quite a bit of work. As N said, “she was worth her weight in fat.”

The day was sunny, which was welcome after several days of cold and damp weather during the snow melt. After having shivered for several nights in a row, without much relief from the sun during the day, it was nice to feel the heat of a boiling vat of fat. The only thing that was nerve-wracking for the first hour or so was standing this close to a pressure canner filled with sheep meat. I was so relieved when it hit the right temperature for me to cut off the propane! 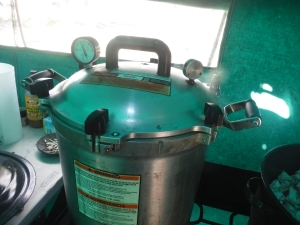 (The greenish tint in the photos comes from the sunlight filtering down through the green canvas kitchen tent.)

The purpose of rendering fat is to separate the pure fat from the other materials, such as meat bits and connective tissues, so that we can end up with a shelf-stable product. You don’t have to refrigerate animal fats if they’re in pure form, whether you’re using them for cooking or for making some lovely skin care products.

We were doing a dry rendering, which meant that I had to stir the fat a lot at first, to keep it from sticking and burning. Otherwise, I could ruin the whole batch!

In this case, that would have been pounds and pounds of fat. The giant stock pot started out about 3/4 of the way full. I started out stirring nearly constantly. Over time, as the fat began to melt away from the other connective tissue, the bottom of the pan was saturated enough in fat to allow me 5 to 10 minutes in between stirs.

After a couple of hours went by, most of the fat was melted off, and I was starting to see the emergence of cracklins!!!

Cracklins are the major reason to do the dry render, since you can’t get the crispy bits if you use water. I’d rather spend an afternoon stirring than wind up with no cracklins at the end of the day. We ended up with a massive quantity of cracklins that felt a bit like a trough that afternoon (ironic, since we were prepping for a pig roast that night). They also made their way into several dinners to follow. There’s no other spice quite like a cracklin. 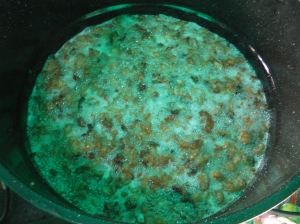 The hardest part of the process was getting the hot fat into the jars without taking off some skin (and therefore, tattoos) in the process. We lined the funnel with a cheesecloth, and then transferred the fat from the vat to the jars using a coffee mug. We’d have to stop partway through filling each jar to wring the fat out of the cracklins that would inevitably get picked up by the mug. It took some deft to avoid burning off one’s fingerprints.

By the time we finished the process, I had sheep fat up to my armpits and all over my face (from eating cracklins, of course). It made it hard to take any final pictures of the process, but my skin was super soft for days!