The Trials of Re-acclimating

I haven’t stopped writing about my experience at the Buffalo Intensive. I have many posts in various stages of done that I just haven’t posted. Also, I haven’t stopped writing the stories of the people who led me down that path. I’ve just quit sharing. I think about these characters all the time. I embody them as I do things…picking herbs and squash, cutting meat, looking at spiders, watching the sunset, running my fingers over a hide or the edge of my knife blade, walking through a cave, standing in the rain…

It took me 2 months to feel comfortable on a mattress again, and I still have a hard time falling asleep indoors. The only perfect night of sleep I’ve gotten was when my partner took me on a date in our back yard, and we had a fire and then slept in a tent under the pines.

I search out good dumpsters, and then grumble that almost every business has a compacter attached.

I came home wanting to be closer to my food. To grow it, care for it, slaughter it. This is a big one.

On the train, I saw people mainly at mealtimes, since I was writing a lot in my sleeper. The first time someone asked where I’d been and where I was going, I’d just been writing some thoughts about food, so I was a little excited to answer. Uh, yeah, that was awkward. Eating roadkill ain’t exactly polite breakfast talk.

Similar scenes happened several times on the train ride home. I wrote a Facebook post about it, pretty amused by the looks of horror and disgust that came my way quickly, without apology or attempts to hide it.

I’ve been living in a tent eating road kill for a month. But back in “civilization,” meal times are truly strange. Why?

There is one highlight so far, though: someone told me you CAN eat bats, if you heat them to a high enough temperature. But they’re so cute…

I look at every roadkill I pass for opportunities. I carry a knife on me and have a tarp in the back of my car. The only time I’ve seen stuff worth eating, I was on my way to an early appointment 2 hours away, and wouldn’t be back home for hours. You can’t leave a dead deer in a hot car all day. And you can’t walk into court for your grandma’s will covered in deer blood, guts, and shit.

And now I’ve learned that you can’t even, in passing, tell someone you’re bummed about missing out on a great roadkill because you had to handle estate business. You can’t say how much you’d have loved to make some deer curry or that you were hoping to make a medicine bag. You can’t wonder aloud what color Osage Orange bark tea would make the honeycomb stomach.

(I could write a whole post of what you can’t say in mixed company about roadkill, skinning, slaughtering, and the like.)

Now, I am sane to know that talking about drinking blood and musing about the possible textures of narwhal skin aren’t everyone’s idea of normal conversations, but I can’t understand why so many people who wear leather and eat meat have looked at me like I’m a serial killer.

After just a few show-and-tells, I stopped showing people the cool stuff I’d made. No one outside of my family has seen the ewe’s skin. How could I show it to someone who won’t make eye contact with me since they read the blog, or who have asked me to not talk about it? Hide-making is magic stuff, so is turning plants into food. I don’t want negative energy around these things for me.

I got kind of angry, to be honest. Angry at the hypocrisy inherent in people prizing clean hands and grocery plastic and pathologizing the desire to get my hands bloody and honor the life that sustains mine.

I talked about all of this with my dear friend Tanya, who told me she understood how hard it was to convey a life-changing experience to those who haven’t lived through it. She’d had a similar experience after returning from a mission trip to Africa. People got so hung up on the “gross factors” of living life close to the ground and completely missed the magic of her spiritual growth and connection to her community.

Tanya is a woman well-acquainted with thanking her food by name, like Linda the goat, who was delicious despite her ornery nature, so she gets it in that way, too. She’s gotten the sideways eye or two over it, I’m sure.

Even with all the controversy over what I’d prefer to eat and what to do with the rest of the animal, it wasn’t the biggest reason I’ve had a hard time re-acclimating.

Even though we had a vague schedule to the day at the Buffalo Intensive, I wasn’t driven by it the way that I am at my corporate job. I have a phone that tells me where I need to be and when with lots of beeps and bloops. Everything is electronic, and feels distant. Time literally flies by.

It never stops, and at the end of the day, I’ve asked myself what I had to show for it. You can’t hold all those emails in your hand (a printed copy is no longer “e”mail). You can’t eat a good paragraph for dinner. You can’t weave a blanket out of one-hour meetings…though if I weaved during every one-hour meeting I had, I could have a stack in no time.

I realized after I’d been back for a month that I needed to feel actively engaged in the moment, that I needed to work on something with my hands and see something tangible resulting from my work. So I ran away and disappeared into the woods…well, my one little acre of private city park, anyway. And I practiced some action meditation and reflection.

I planted a vegetable garden, and, later, another. I’ve dried herbs and cooked veggies. I’m planning out the canning season ahead. I mourned the fact that I won’t be having fresh arugula from my garden this year, nor beets and carrots. I’m still holding out hope for the non-blooming sweet pepper plants.

I’ve pruned my roses more diligently than they need it. They look tidy, but produce fewer blooms than they did when I let them go wild.

I’ve spent a lot of hours on my front porch, with my partner, our dog, and my ukulele. I’ve played “Space Oddity” and “Looking Out” and “Tonight You Belong to Me” more times than I can count. I’ve come to terms with the fact that I am not a good singer, and most of the songs I love are completely out of my range. I’ve also learned to re-string a ukulele because I’ve worn out my first pair of strings already. My dog is my #1 fan. 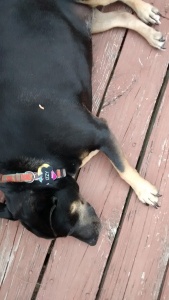 When the rain drove us all indoors for weeks, I took a room that was piled to the ceiling with boxes and furniture and turned it into a swanky writerly retreat. I’ve gotten rid of several pieces of furniture, tons of knick-knacks, 75% of my books, and at least 50% of my clothing. And I have the next round of gleaning already thought out. I have so many things I do not need.

And I do still tell stories, because I can’t do anything else. I have an endless supply of stories about work, community projects, my daughter’s head injury, my partner’s serious spider bite, the new puppy, and so on. And on top of 39 years of life, I have a cache of stories left to me by others.

I just haven’t been telling these stories. My partner said to me the other day that I still hadn’t shown him pictures of my trip, except what he’d seen on the blog. And then a co-worker asked about my other projects that I hadn’t brought into work. And then a friend asked when I was going to post some more stuff about my trip. And then another.