With all the rain we’ve had here in central Kentucky this summer, I don’t have anything near the tomato crop I was expecting by this time. The last time I had this many plants, I was completely overrun. Actually, nothing in my garden is producing as much as I was hoping for. So it seems like I’m going to have to support other folks’ gardens a lot this canning season.

Since it was the first of August, and I had the house to myself the rest of the weekend, I thought it would be fun to put on some good music and can. And what better way to start off canning season than with some of the lovely free stone peaches they had at the farmers market Saturday morning?

Now, I’ve never canned peaches before. All my mom ever preserved was concord grape jelly. I learned to can about a decade ago, but most of my experience is with tomatoes and apples, two of my favorite things. This year, I want to expand my canning skills and see if I’m able to put up enough stuff to get through the winter months.

All of the homemade peaches I’ve ever had were sickeningly sweet with white sugar or, even worse, splenda. Well, I have had some preserved in bourbon, which I made a cobbler out of, and I’ve had some floating in moonshine, but that’s a topic for another day. I’m in the mood for peaches to eat with my breakfast of homemade yogurt. Mmm…

The problem with those white sugar-sweetened canned peaches for me is my diabetes. And splenda gives me a headache. They’re both refined crap, and I prefer to eat a primal diet, which means I need to use something natural instead. To me, nothing beats a local honey.

I bought some pure raw Kentucky honey from Nick and Bev Nickels, who live right here in Lexington.

So, I put on a little P!NK and set to work. Why P!NK? She did one heck of a sexy duet with Peaches back in the day. And to me, peaches are one of the sexiest fruits on the planet. 🙂

Supposedly, all you have to do to prep jars is just wash them and dry them. BUT I’ve had serious food poisoning a few times (not from home canning, to be clear, but botulism and salmonella are equal opportunity bacteria), so I’m cautious. It’s not hard to sanitize the jars and lids, so why not just do it?

After 10 minutes, I took the jars off the heat and set them out on a towel to dry. I turned the head on the lids and rings to low and left them on the heat until I was ready to start packing the jars.

To help keep things sanitary, make sure you have one of those magnet stick-thingies (that’s the technical term) and some jar tongs. It’ll also keep you from burning yourself too much. Though I pretty much always burn myself when I’m working with big boiling vats of liquid, it reduces the number of times.

Now, you can peel peaches with a knife and call it a day. But inevitably, my paring knife takes off too much. And I’m not going to waste one smidgen of those lovely peaches.

A better way, in my opinion, is to peel them the same way that I peel tomatoes. I put on a pot of water to boil (yes, another one–it got hot in there!). I scored the bottoms of the peaches with an X. Once the water was boiling, I dropped in a few at a time for about a minute, then fished them out with a slotted spoon and dropped them directly into a sink with ice water.

You can literally peel off the skin in long strips, sometimes a full quarter of it at once. Even better–I did this in my sink with the disposal, so there was no cleanup.

Naked peaches! See, they are sexy.

I then halved the peaches, removed the stone, and then cut each half into four slices. I dropped the slices into the jars, one peach to a jar at a time, and then went back and added more slices to fill them up.

At the farmers market, I’d scored 12 freestone peaches (which weighed in at 6.5 lbs). I was able to pack all of them (well, 11.5 of them after a “quality test”) into 9 pint jars. That was perfect, since my canning pot holds exactly 9 pint jars.

The ratio of water to honey I used was 8:1, plus a cinnamon stick. Put it all in a pot and bring to a boil, then reduce the heat.

I boiled 16 cups of water, 2 cups of raw honey, and 2 cinnamon sticks. This turned out to be twice what I needed, so now I have 3 quarts of honey-cinnamon syrup. Guess I’ll have to can another dozen peaches. Oh, darn.

For canning peaches, you can use the water bath canning method. This is basically just a huge stock pot with a wire rack in the bottom.

Fill the conning pot about halfway with water. Don’t overfill it like I did at first; the weight of the jars raises the water level. You can always pour some hot water into the pot from a teapot or pan once the jars are in. You can actually put this pot on at the same time as you do the syrup, that way the water’s hot and ready when you are.

Pop a funnel in the top of the packed jars and ladle the syrup in, leaving about 3/4″ to 1″ of head space. This was about one cup for me, give or take a couple of teaspoons. 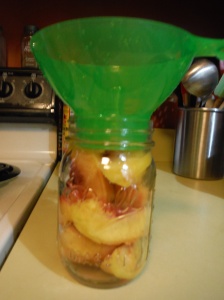 Use one of those magnet stick-thingies to put the lid on, and then hand-tighten the ring onto the jar. Set them onto the wire rack in your canning pot. When they’re all in, add more hot water if you need to and cover the pot.

Bring it to a boil and let it go 25 to 30 minutes while you dance around the house, then turn off the heat. Uncover the pot and let the jars sit for 5 minutes or so. Then, use the tongs to pull the jars out of the water bath. Set them in a place where you can leave them undisturbed for 8 hours or more.

I started canning after 10 p.m. because it was super hot until after the sun went down yesterday, and all that boiling water turns my kitchen into a sauna. Plus, it just feels right to be singing and dancing in your own kitchen after dark.

Putting Up the Peaches

The next morning, push down on the lids to make sure everything sealed up nice. If they didn’t, just stick them in the fridge and eat them in the next couple of days. Oh, I’m sure it will be soo sad to make up some GF banana pancakes and put a few peach slices on top next Saturday morning.

All mine sealed, even the syrup, so I guess I can keep them for a little bit before I make my next batch. They were pretty!

The consensus is that home canned goods can last about a year or so in the pantry. Beyond that, and they can lose their flavor or get muddy. I doubt these peaches will last that long, anyway.

I’m going to make up a batch of Civilized Caveman cereal (best cereal ever!) and eat that with my homemade yogurt and peaches. Mmm…I can’t wait. The first thing I did on Sunday was start my milk for yogurt.