Day of the Buffalo

On our way to Fargo last night, we’d started seeing the North Dakota license plates with the buffalo on them. I knew we’d get to see some live ones, at least a few.

Very early this morning, we crossed the Buffalo River.

After a quick nap in Fargo, ND, we set out westward toward Theodore Roosevelt National Park in Medora, ND. Along the way, we saw some billboards with buffalos on them, some buffalo-themed places, the kind of stuff you expect out west. We remarked on it, but didn’t think much about it.

But then we saw a sign that really got our attention: WORLD’S BIGGEST BUFFALO. We have to see it, I said.

Oh, and it’s at the National Bison Museum in a frontier village? See, we have to see it.

The next billboard had a picture of two white bison on it, an adult and a baby. It proclaimed 1 IN 10 MILLION, AND WE HAVE TWO. They have two sacred white buffalo?

There was no way now that we would pass up Jamestown and all its buffalo goodness.

The frontier village was a cute little Western-themed town with Louis L’Amour’s actual writing shack in the center of it. The leather goods store had buffalo chaps, horns, and polished teeth tucked amongst all the kitch for sale. Nathan took two pictures of me wearing a leather cowboy hat just before I read that they charge you $20 for each picture you take wearing their hats unless you buy them. Oops.

At the end of town, there he stood: DAKOTA THUNDER, world’s biggest buffalo. He’s 26 feet tall and 46 feet long. He weighs almost 60 tons and is anatomically correct. 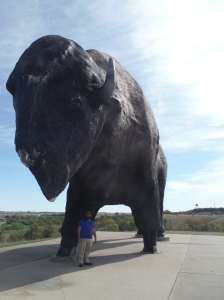 In Jamestown, a herd of about 30 bison free range over more than 200 acres. Somewhere are the two white bison. White Cloud is a true albino. She’s had 4 brown calves and a white one, named Dakota Miracle. We scanned over the land with binoculars, spotting a few regular bison, barely visible since they were taking cover from the sun in the trees.

We had a nice walk, but thought we’d be leaving the National Bison Museum without really seeing any buffalo, including the white ones, and so we got in the car with a white buffalo snow globe and munched on some Tanka bison jerky.

As we started to pull away, I heard a man say, look, there’s a white one. So we parked again and followed them the opposite way that we’d walked before. Most of the herd was over by the highway, including one of the white ones. I’m assuming it was the mama because she was pretty big.

I couldn’t get a good picture of her, but through the binoculars, I could see her chewing and kicking at flies, acting like pretty much any other buffalo. Soon, the herd moved out of view.

On our way out of Jamestown, we stopped at a general store that had a “Baby Buffalo” sign out front. So, of course, we stopped. Who doesn’t want to love on a baby buffalo? They are adorable.

But this baby wasn’t one of the carefree bison babies I’ve seen at Yellowstone or Custer State Park, kicking up its heels in play like oversized baby goats in pajamas. This baby was living in a very stinky small pen. It was so swarmed by flies that it kept kicking its mom as it tried to nurse.

The living conditions were horrendous in that pen, and the paddock outside wasn’t big enough for 3 horses, let alone 3 bison. The bull looked like he’d given up on life. The mama looked bored and overworked. The calf wouldn’t stop trying to feed. When the mama came up to a trough and looked up at me, I realized she wanted to be fed. There was a tube you could drop some corn feed that you buy from a quarter machine.

The whole thing was sad, just like those black bears in concrete pits that you find in Gatlinburg.

At first, we’d planned to buy some souvenirs at this place, since they were better than the ones at the National Bison Museum. But, after seeing those conditions, we put stuff back on our way out the door.

Two hundred miles later, we arrived at the Painted Canyon entrance to Theodore Roosevelt National Park. Until two months ago, I’d no idea there was a TRNP, and I’m so glad there is one, and that it’s got bison and badlands. Two of my favorite things.

Not 50 feet later, we came upon a small herd right by the road. They seemed pretty content and laid back, but I kept my distance anyway. I walked around, looking at stuff, taking pictures of the views, taking pictures of the buffalo. I guess I got too close or lingered too long. The bull stood up and watched me until I made my way out of his view again.

As we gazed at Painted Canyon, we saw bison herds way off in the distance, and then a lone ranger who seemed at first a statue he was so still.

Then we drove on to the main entrance to TRNP, so we could get our camp set up and eat before sundown. Darkness comes quick in the desert. No slow burn down in the sky like we have in Kentucky.

Cottonwood Camp is located 5 miles in to TRNP. They have water stations and privies, but I wouldn’t use the privies. That’s how we get to the next part of this story.

After we got camp set up and dinner eaten, I went to enjoy the scenery while taking a pee. We have this breathtaking view of a butte just behind the treeline that surrounds our camp. I was squatted down, enjoying the view, and then I heard something off to my left. There was a bull grazing roughly 100 yards from me. I finished and backed away quietly.

I sat in camp, watching as the bull started coming closer, then realized he was investigating me when he sniffed around at my little natural bathroom. And then he turned up the little path back toward our camp. I tried to be still, but he was a little close for comfort.

He came further into camp, and we started backing away from it. I went all the way to our car to watch as he sniffed our tent, our food box, and all of our things laid out on the table. He took his sweet time. 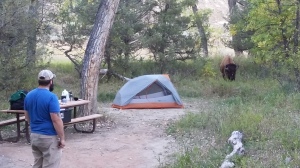 Eventually, he passed through our campsite, walking as close as 12 of my steps from me as he did so. He looked at me as he passed. He hung out at a nearby camp site for a while, and we didn’t see him again after it got dark.

All evening, we saw and heard them. As I wrote this in the tent after dark, I had to keep closing the computer to make sure the light wasn’t attracting them. Several times, I heard the rustles of the grasses, the heavy fall of their hooves, the deep wet of their breath on the cold air.

Eventually, three settled down to sleep around us, two in the brush at our heads and one at our feet. I told Nathan I felt surrounded, and he said that’s because we were. It was exciting and a little scary at the same time. Just as life should be.

But it’s hard to avoid looking at the spiritual side of this experience, especially since there was a white buffalo in our day. The White Buffalo Calf Woman brought peace to the people by making them reflect and act differently. In nature, the buffalo brings abundance to the prairie, providing food and shelter for many animals. Like wolves, their presence can dramatically change the ecosystem. Buffalo are free-roaming, and can hardly be contained by fences. They’re often killed for escaping their modern captivity. They possess individual strengths, but stay with the herd.

So, I ask myself am I bringing love and right action into my community? Am I making the right kinds of changes to my environment? Do I have enough freedom in my life, or am I tearing down fences meant to keep me safe? Am I humble enough to accept my own strengths without seeing dependence on others as a weakness?

I am grateful for this reminder from the buffalo to look at the sources of sustenance in my life and my role in the sustainability of the world and people around me.