We’ve raised a garden a few times, but this year, we decided to literally raise it. Fighting the weeds in our garden last year was a losing battle. So last fall, after we harvested the last of our sweet potatoes, we piled the garden area high with trees and honeysuckle cut from our little wild acre in the city, and set it ablaze.

This spring, my partner turned the burn remains and manure into the soil. Two tillings in the course of two weeks and the weeds had already taken over. So we let our seedlings grow in pots and formulated a plan during the rainy weeks in early May. 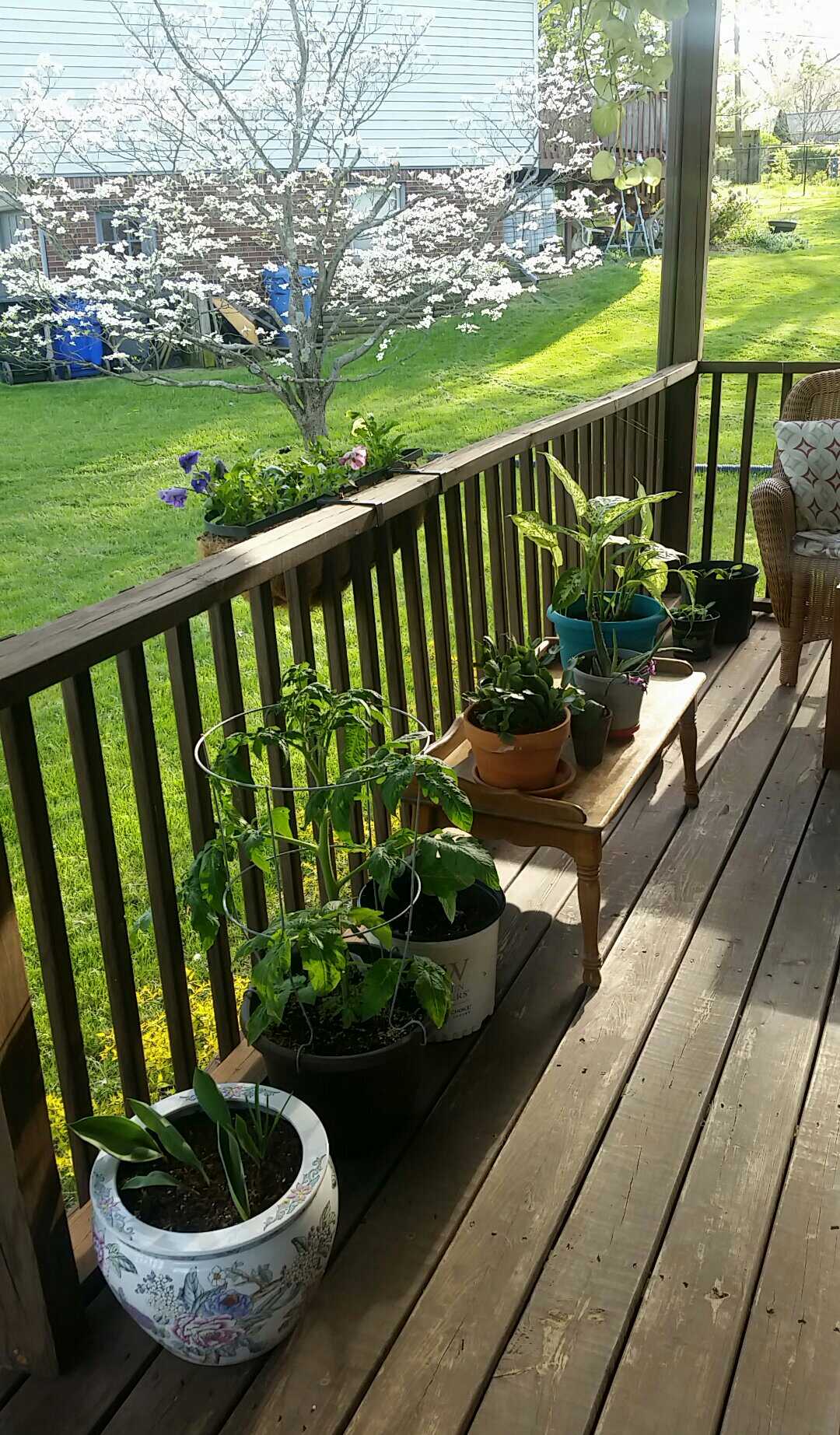 The giant tomato plant that I would later snap in half 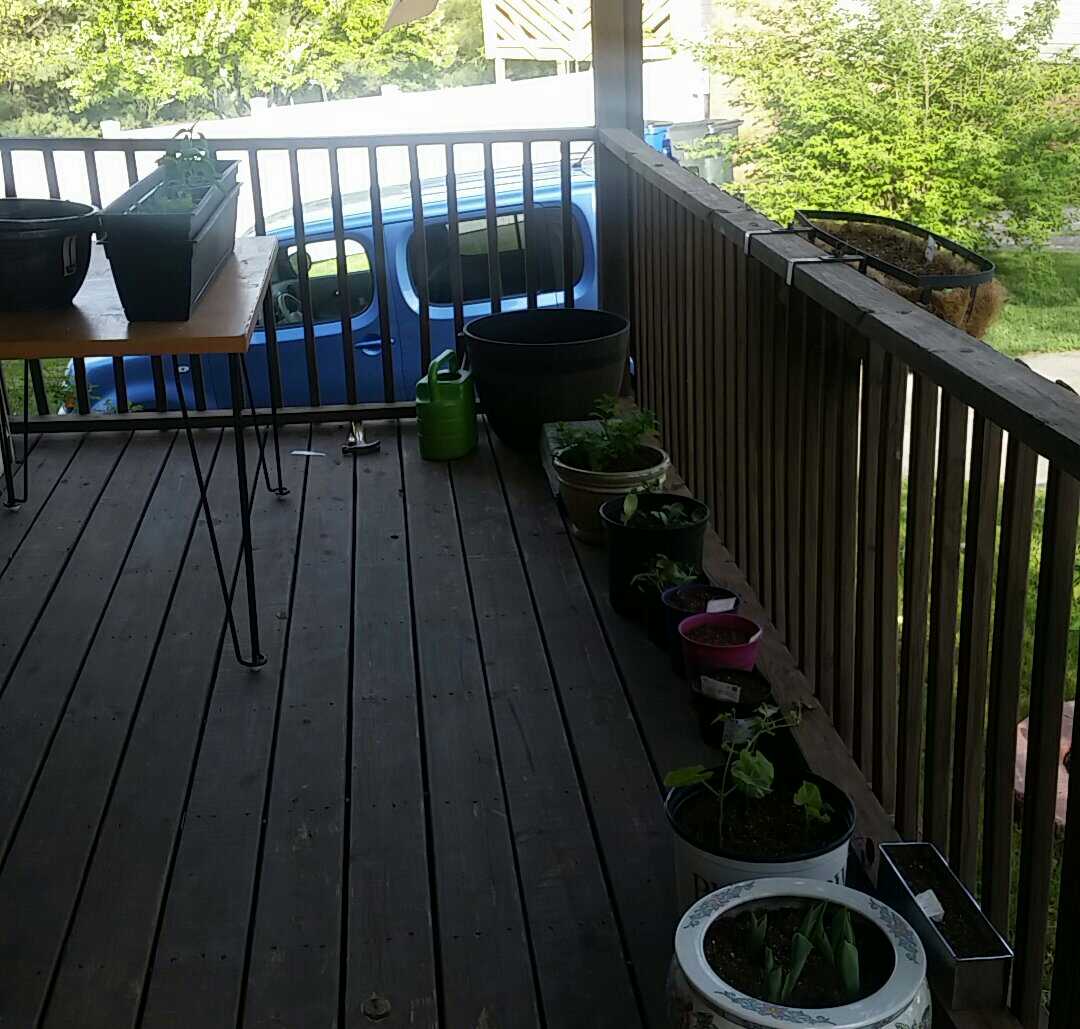 Our other vegetables and herbs

Based on the drawing, I did the maths, so I knew exactly what we needed when we got to the hardware store, and even how much it would cost, to the penny.

But when we got there, they didn’t have 2 x 6 x 8s, so I had to do maths again, on the fly amid stacks of lumber. Yeah…there’s a reason I majored in English. Spoiler alert: we’d quickly realize my math error when we started building, but more on that in a minute.

I had to recalculate using 2 x 8 x 8s, which changed things up a bit:

Because our circular saw is an 8″ blade, and I’m terrified of it, we decided to go ahead and have the boards cut in the store. It saved us a lot of time and didn’t cost us anything, since the cashier didn’t charge the 25 cents per cut they normally do.

Along with the lumber, we came home with 10 cubic feet of organic garden soil (dirt + chicken poo), half what we’d need, but all we could fit on that trip. My calculation that we’d need 20 cubic feet turned out to be spot on, so I aced that volume figuring problem.

The first step was to cut back the weeds that had grown a foot or more in less than a week due to excessive spring rains, and giving the ground a fresh turn with the tiller. 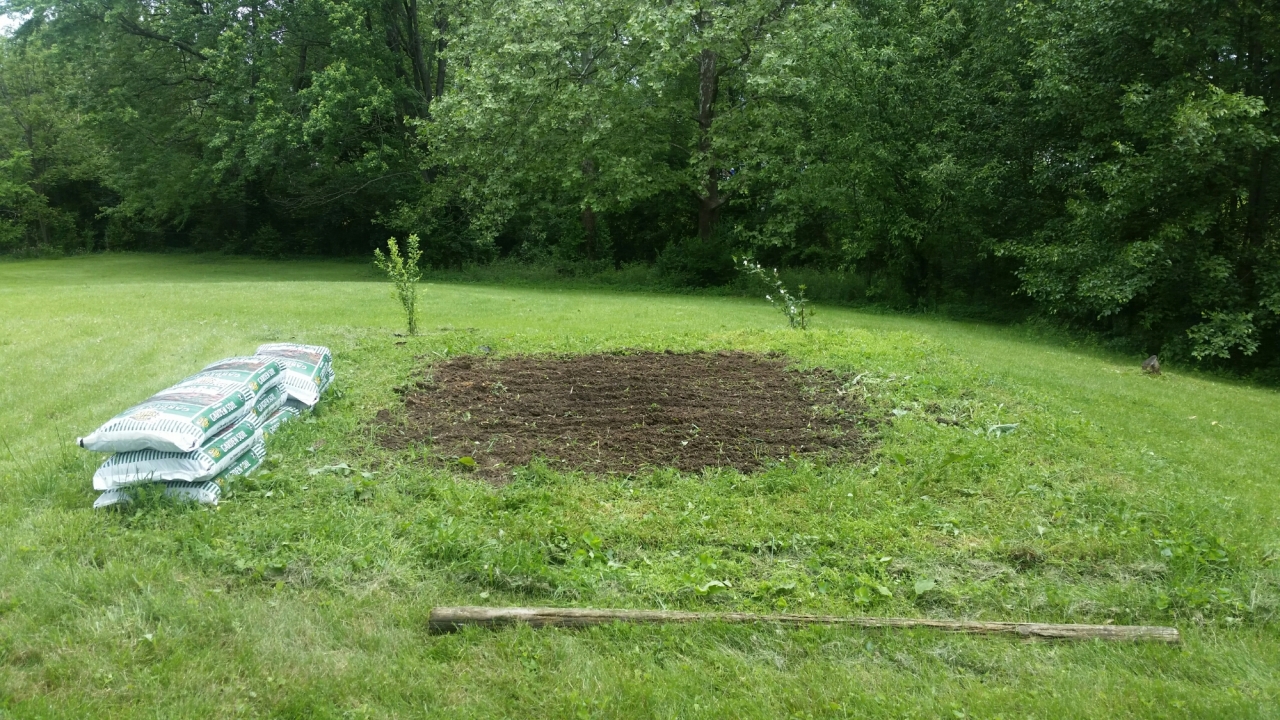 After laying out the boards on the site, we realized that it would be best to build and set the 4′ sections first, then attach the 8′ boards.

Our initial impulse had been to build and set the 8′ sections first, but we soon realized that, if we aligned the edges of the boards on the posts, then our long sides would end up on the inside of our short ones. That would cut away precious square footage from our bed. We wanted every inch possible, which meant we needed the short sides inside the long ones.

Here’s where you can start to see my math error. Because we had the posts cut to 3′, it meant that we would have 20″ of post left to contend with. Yikes. Digging 20″ holes seemed excessive for a 4 x 8 garden. So we went with 16″, equal to the height of the boards that would make up the sides.

We measured and marked 16″ on the posts, then secured a board flush with that mark and the outer edge of each post, using 3.5″ decking screws. Then we lay the second board flush to that and secured it as well. 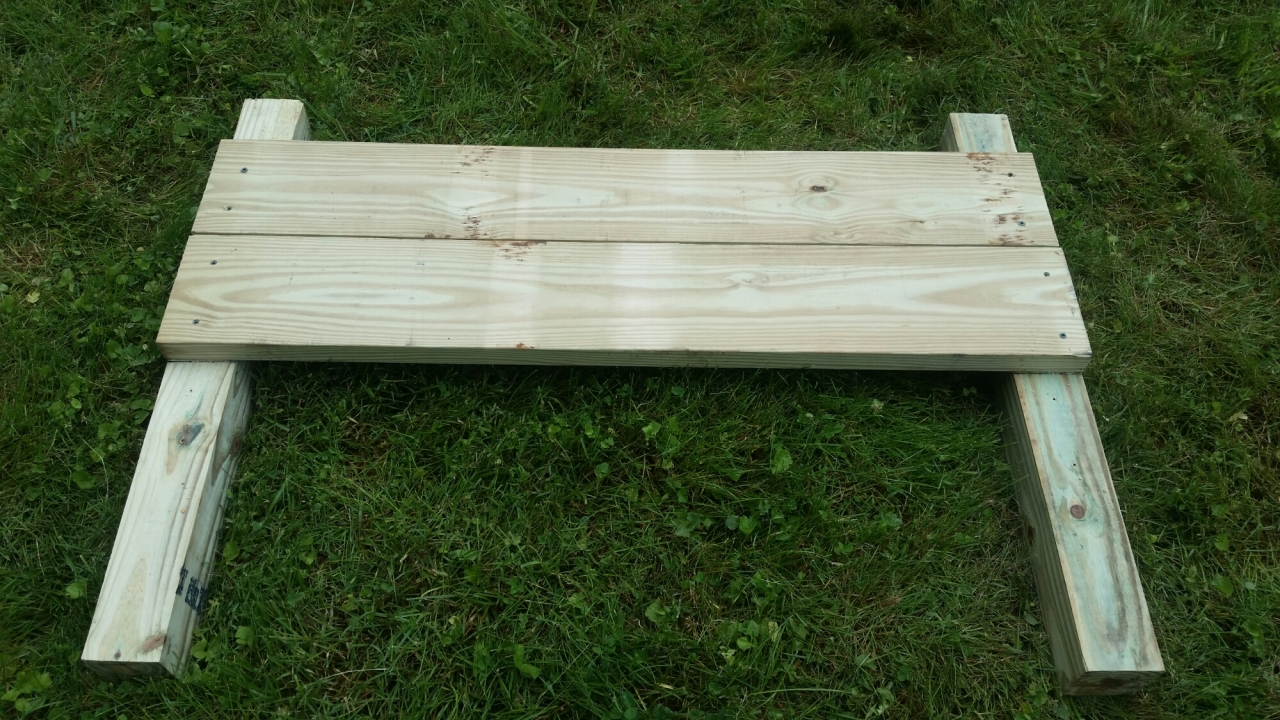 That left a 4″ post sticking up at each corner. We’re still deciding whether we care enough to take the chainsaw to it. Maybe we can use them to help with an automatic watering scheme we’re dreaming up. Maybe we’ll add a 4″ board around the top. Or maybe we’ll just leave it to remind ourselves to check the math 5 times.

We repeated this process on the second 4-foot section. I’ll just caution you here by reminding you to compare your marks to make sure you’re attaching both legs the same direction. Lesson learned. 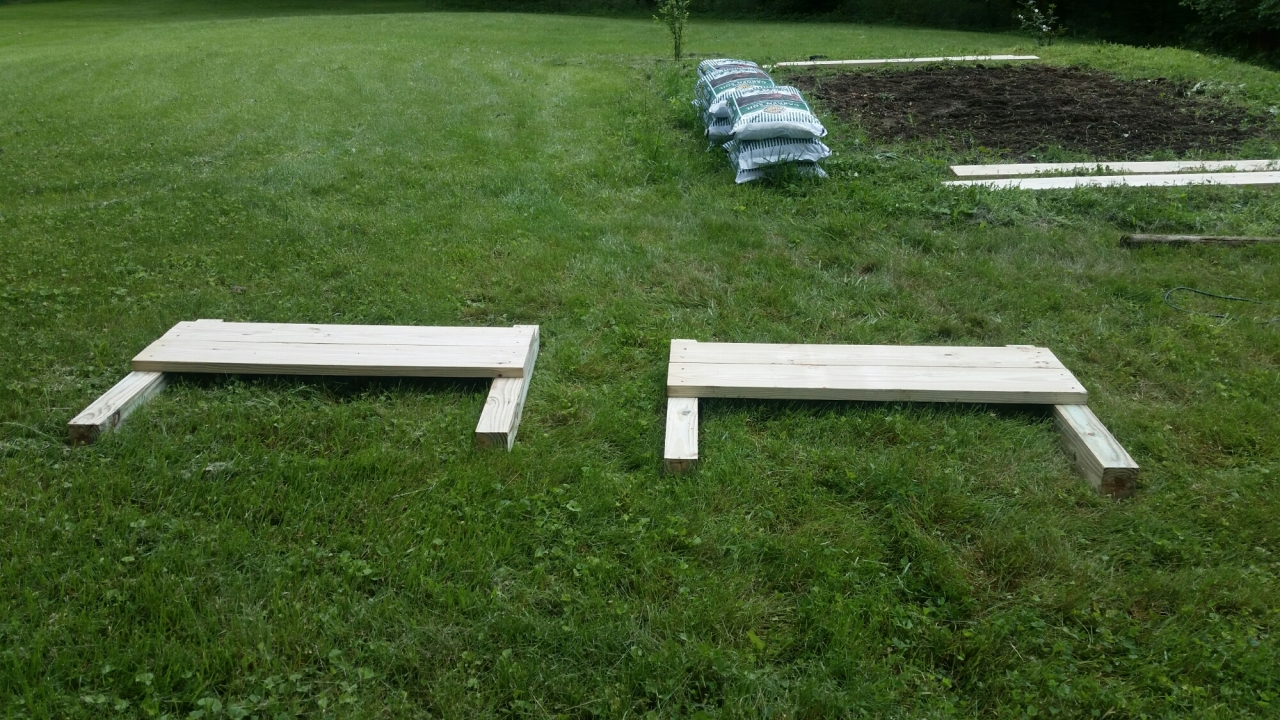 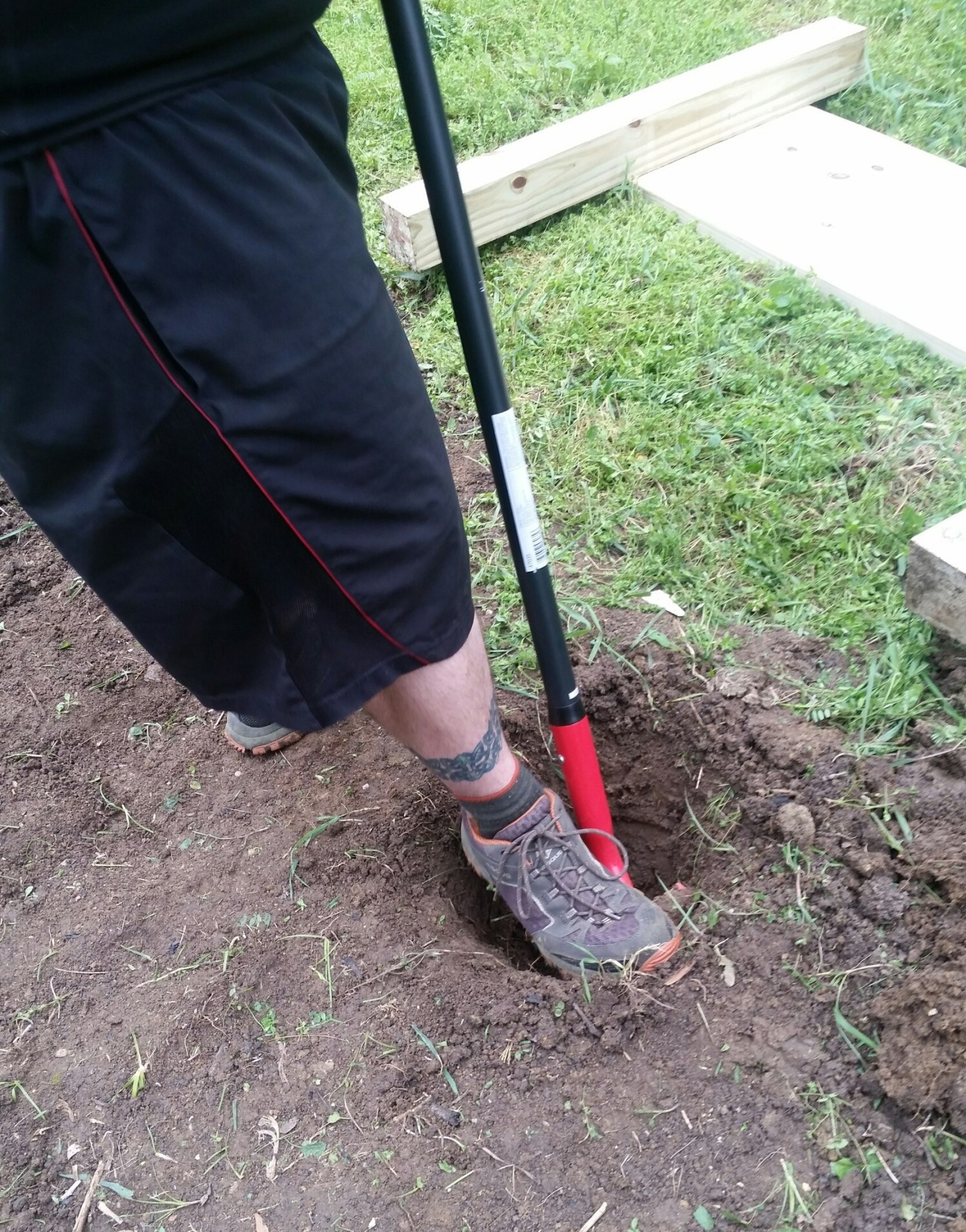 You might wonder: Frankie, wouldn’t a post hole digger be faster? Maybe. Some parts of Kentucky turn to clay just a few feet down, and I’ve seen my uncle break one trying to set fence posts. And since two of the holes turned to clay about 8″ down, our investment in a narrow shovel turned out to be a good call, and now we have a tool that will be useful for other projects.

Also, it’s pretty satisfying to dig out the loose dirt with your bare hands. After you get more than 10″ in, hands work best anyway. 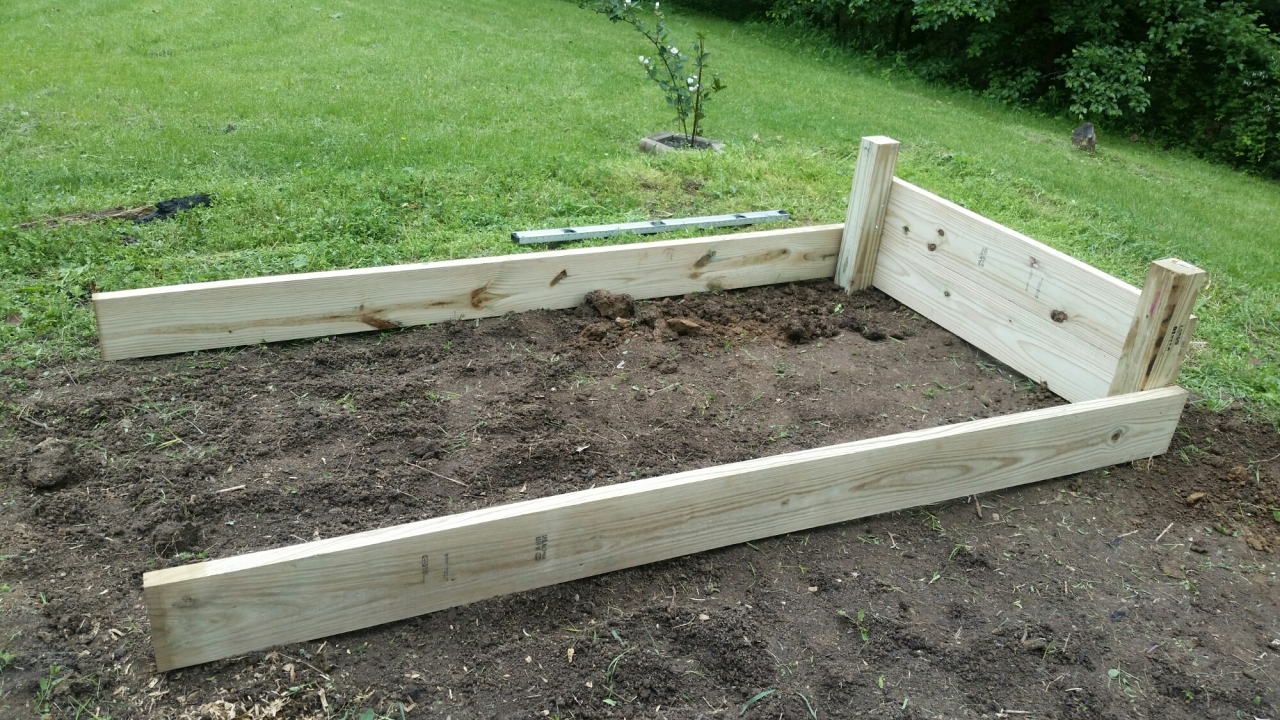 One side set, one to go 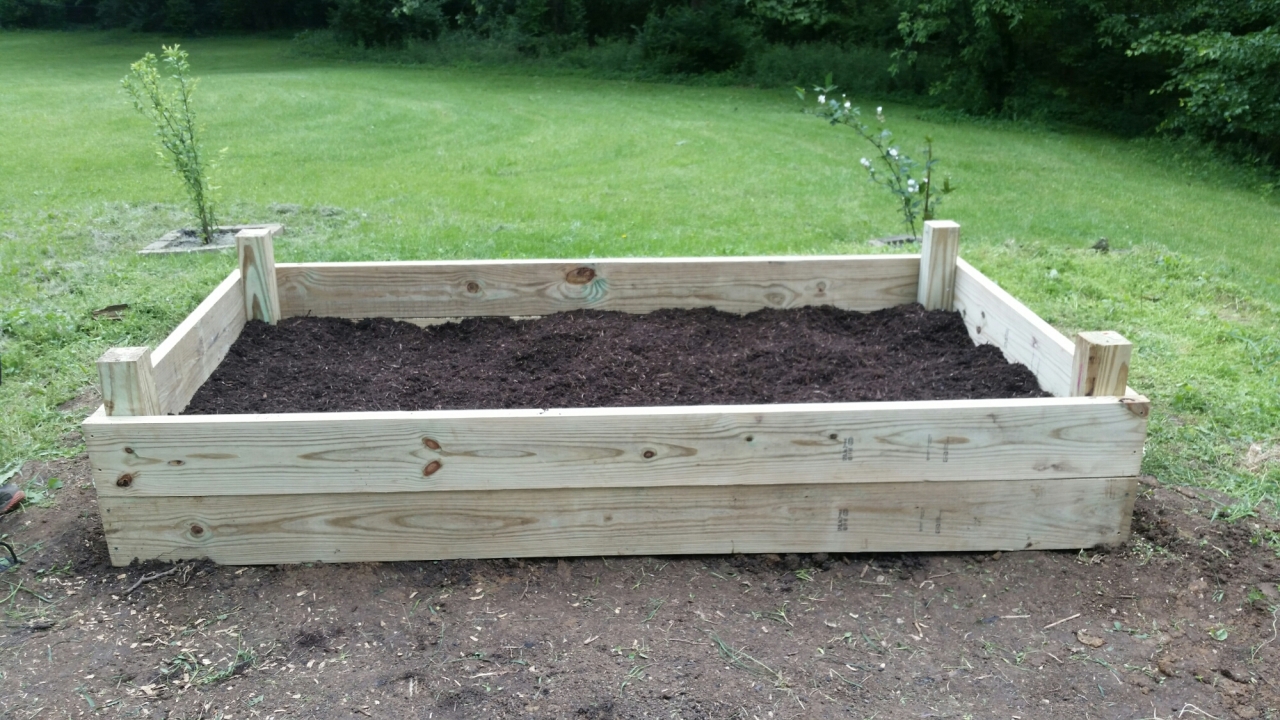 Because it almost promptly decided to rain on us when we finished, and then continue on and on, it was a few days before I got to put my plants in. I started laying everything out in the box and realized I could fit a few tomato plants, several types of peppers, and kale—a few of my favorite things. 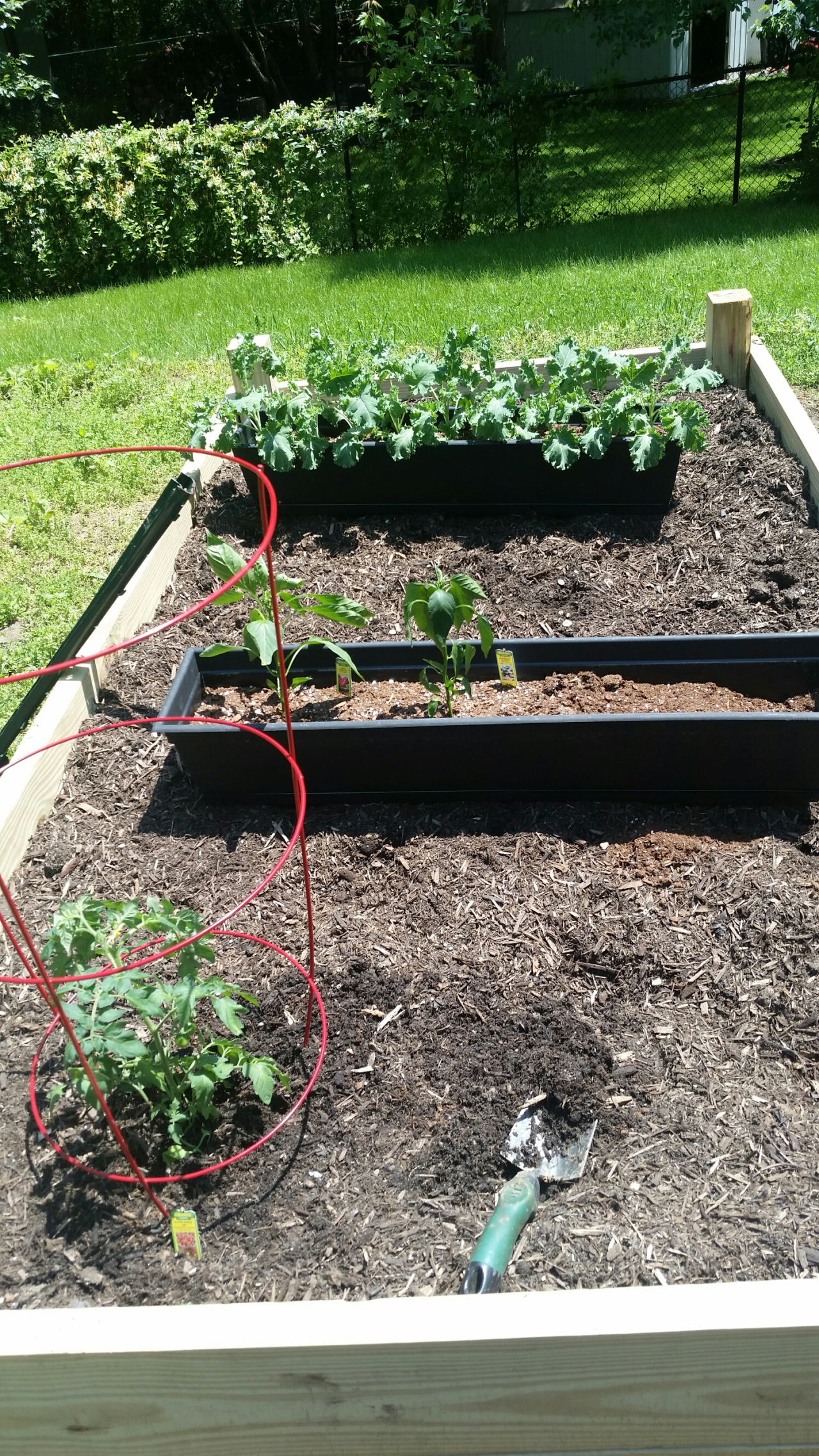 I started out with only 2 tomato plants, one cherry and one slicer, but broke the large one (which had a lot of flowers already). Then, when I went to the nursery, they were having a buy 2 get one sale. So, now I have 4 tomatoes–cherry, red slicers, yellow slicers, and Amish Roma saucers (which I plan to dry and can in oil).

I also have a nice variety of peppers: cayenne, poblano, maricino, and pepperoncini. No bell peppers this year, but they aren’t hard to come by with a bit of trading or a trip to the farmers market. We eat a lot of them, but they aren’t something you can preserve well. I plan to pickle the pepperoncini. Yum. 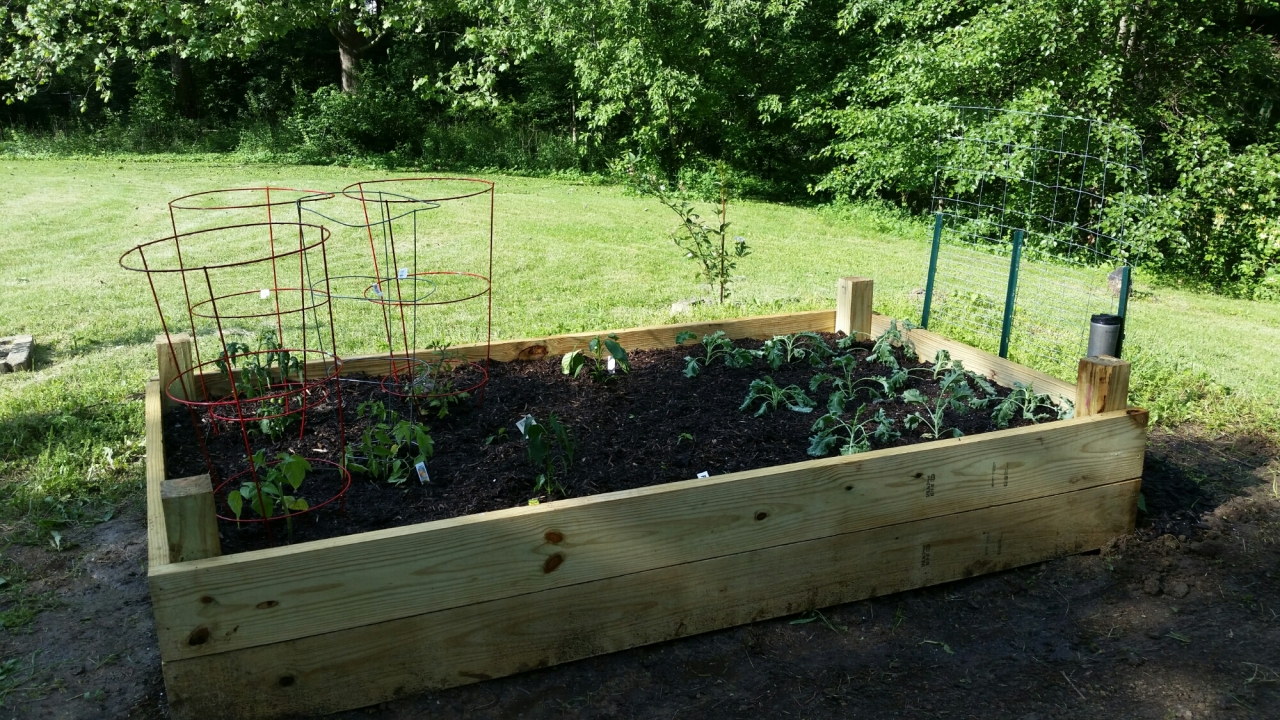 We don’t eat a lot of legumes in our house since I gave them up to go primal, but a friend gave me her extra green bean seedlings. So, I decided to build them a little climb at the end of the bed, using some posts and chicken fencing we had in the garage. It’s what we used last year to enclose and “protect” our garden last year. But fences don’t keep out birds, beetles, or weeds, so it’s useless to us. I’m checking them daily to make sure they cling to the posts and climb the fence. So far, it doesn’t look like I need to tie them.

Since we only built one bed, I had to put our zucchini plants in the ground. We’re starting with 9 this year. Last year, we had 6 and lost 3, but they were great producers. 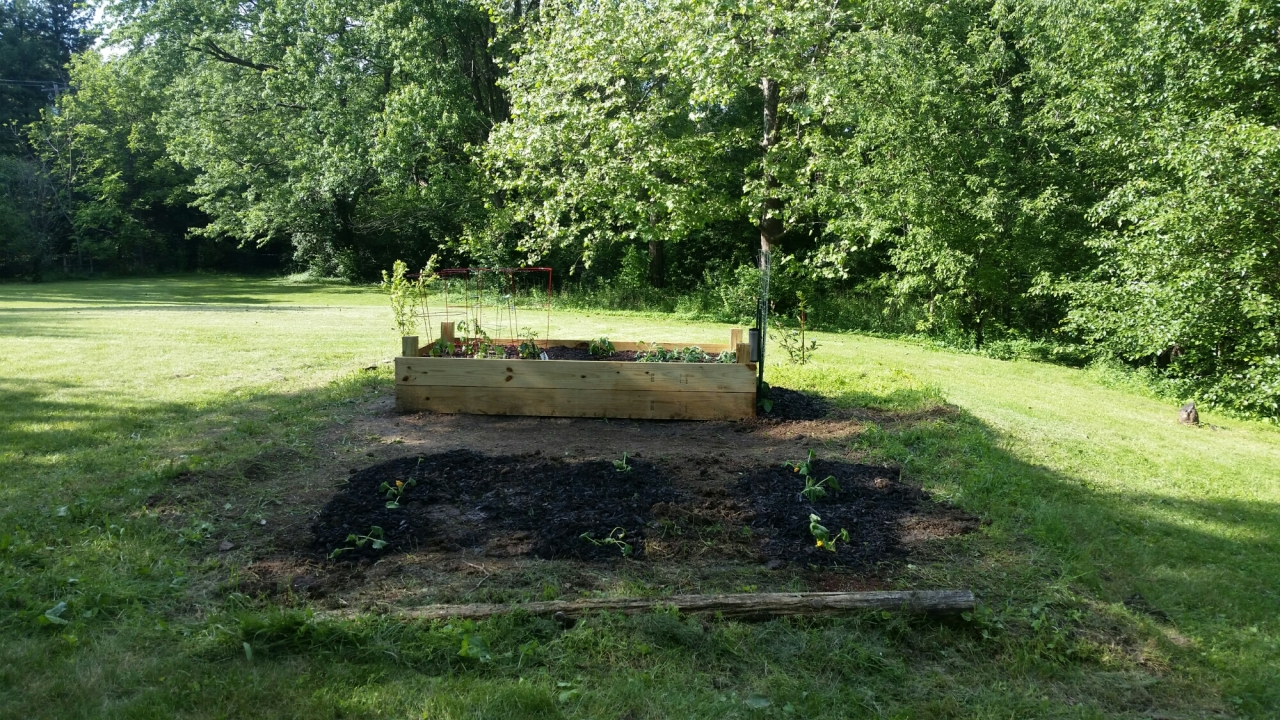 Along with our plot of veggies, we also have some fruit. I bought this plum tree and blackberry shrub in the clearance section last year, almost dead. I’ve fed and watered them, pruned the dead parts, and whispered them lovely words. This year, both had blooms, and I’m starting to see berries! I have plans to add some more, so we can have a proper jam-making party. 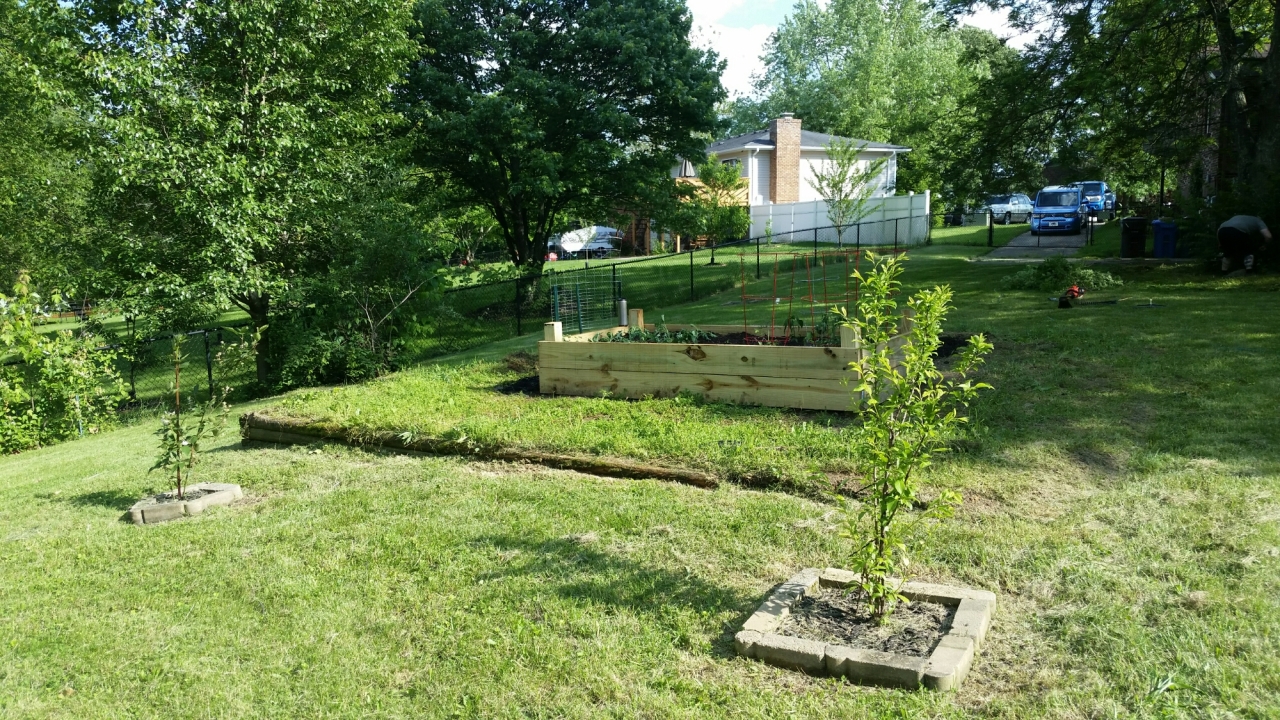 Another view of the garden and our future fruit harvest

The day we built the bed, we started around noon and was finished by 4. Considering we had to take a few breaks to adjust our plans, that’s not too bad.

So, if I had it all to do over again (and I do, since our plan is to add another raised bed next spring), I’d do two things differently. First, I’d call the store to make sure that what they have online is what they actually carry in-store. Also, I’d only go about 6″ deep with the post—it’s a garden, not a porch. My partner doesn’t even want to do the posts when we build the second one next spring, but I think we need them for long-term stability.

I can’t wait for the fresh summer veggies to jump onto my plate every evening! There’s nothing quite so satisfying as feeding your family with food that you’ve tended with your own two hands.