Hiking at the Natural Bridge

What better way to ring in the new year than going on a hike? My partner and I decided last night that we should go to Natural Bridge today. I’ve been in Kentucky for over 12 years, and though that was the first state park I visited after moving here, I didn’t make it to the top that day. My teenager was a toddler back then, and she melted down halfway up the trail. I tried to carry her up, but then realized it was a bit too steep for me to carry a person who was already half my height (she’s six feet tall now).

After many, many trips to the RRG, I still had not seen the Natural Bridge, which is the most visited sandstone arch in the RRG geological area. So, we drove out to the Natural Bridge State Resort Park in Slade this morning. The maps make it seem like Natural Bridge is something other than what you find in RRG, but that’s not the case. It’s all the same area, it just is claimed and maintained by different government entities. The only difference is that Natural Bridge has some very well-maintained trails with benches along the way, or even a sky lift in the warm months if you don’t want to hike it at all. Oh, and you can’t take dogs into any Kentucky state parks, so we left ours at home for the day.

We parked below the lodge and hiked up. I realized immediately that it was a day to be fearless, because I encountered this less than a quarter mile into the hike:

I have an unnatural fear of suspension bridges, which I’m working on, and will probably keep working on for as long as I can hike. I had to cross this one twice, on the way up and back.

We ran into a group with several kids (and a dog) early on, so my partner said we should go up Devil’s Gulch and come down the easier way. Because some of the leaves were wet, it would probably be too slippery on the way down anyway. So, we took the Original Trail to the first fork at Rock Garden trail, and then split off and take Battleship Rock up to Devil’s Gulch. There was a set of stairs on the trail map, and this is what it looks like from the bottom.

It disappears, but trust me when I say that you have to climb this one all the way to the top. I didn’t count all the stairs, but after the whole hike was done, my FitBit said I’d climbed 43 flights of stairs over the course of nearly 11,000 steps. I’d say at least 3/4 of those flights of steps were in the Devil’s Gulch.

This was the second leg. 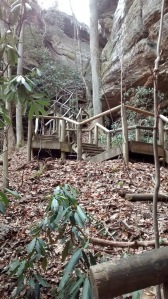 I didn’t get a picture of the third leg because I was a little too scared to take out my phone. Balance was the only thing I was worried about. The ice on the steps started at the top of the first run, and the handrails and steps were pretty covered up on the second. The third run is all carved out of the rock face, and was a solid sheet of ice. You can see the part I’m talking about if you watch this video, from about 1:20 to 3:30. Just imagine everything covered in ice. I was more than a little afraid, but I didn’t doubt myself. Somehow that was enough to make it to the top.

We hiked the Laurel Ridge Trail out over Needle’s Eye Arch and out to Lover’s Leap, and then back around to the overlook ridge, where you can see the Natural Bridge from a distance.

It was a clear day, so you could see a long way, but unfortunately, there’s now a cell phone tower in view of the arch itself, something I’m not used to encountering when hiking some of the more remote areas of RRG. So we ate our lunch in our own private alcove of trees at the top, and the sky was magical.

Then we said our good-byes to the arch and headed back down the path toward home.

One of the coolest pictures I took all day was this guy, who I called Sheltowee.

Sheltowee means Big Turtle, and it was the name given to Daniel Boone by the Shawnee. The Sheltowee Trace criss-crosses the whole area, and we were on it part of the way. You can always tell when you see the blaze.

I’m already counting down the days until the next hike at RRG.