It’s been a while since I wrote a post. I’ve been busy with preparations and we had a little snow here (about 16″ in my neighborhood), which Kentuckians dubbed “SNOWMAGEDDON.” To be fair, my sister in Tennessee said they were calling it that there too. It took almost a week before I could get my 2-wheel drive car out of my driveway (well, without family and neighbors helping to push it). Thankfully, my wonderful partner has a Jeep, so we weren’t stuck completely.

Good thing, too. I had some fruit to dry…

I eat fruit every day, so the thought of going a month without fruit makes me shudder, since it’s a great comfort to have some apple chips when you’re living in a tent and it’s cold. I knew I needed fruit for breakfast, sometimes for lunch, and for snacks.

I can’t just eat fruit the whole month, and I was 6 weeks out from the Bison Intensive, so I made a plan:

Week 4: Sauces and bark, plus anything else I forgot

Week 5: Pack the drop boxes (I can’t carry all this food out there!)

It sounded simple enough. But I had never dried any food on the scale that it was going to take to give me fruit every day for that month, plus the travel on both ends. And my first plan of the amount of fruit I’d need was very wrong.

Ok, my first three plans were wrong. I took several trips to our Co-op, Costco, and Kroger to get all the fruit I needed, plus the nuts and seeds I’d need for protein to offset the sugar effects of dried fruits. Jeep to the rescue!

Here’s what I bought to dry:

I also bought some raw cashews, pecans, and pumpkin seeds, along with way too much organic coconut flakes. (I’m going to go back and toast a bag or two of those, with the hopes that they turn out like the Dang coconut chips, which I should have just sprung for.)

I dried all my fruit with my tried-and-true Nesco American Harvest, which I’ve had for years. It’s loud, but it does the trick. It just does it in *very* small batches. We got used to the constant hum in the background, and relished the smell of all the lovely fruits that were drying. My personal favorite was the cinnamon apples.

I had a couple of handy gadgets to help with the prep work (besides other humans, of course). For apples, I used one of these doohickeys: 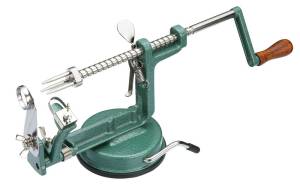 This makes a big apple slinky, so I just cut each stack in half.

It’s important that you soak your apples in a citrus bath for a while before drying them. Otherwise, they’ll get all gross-looking . Some folks say you should do the same with bananas, but I don’t mind a brown banana. I used a 1:4 ratio of lemon juice concentrate (the bottled stuff) to water. I let them soak for 10 minutes, then put them in the dehydrator.

For pineapples, I used one of these thingamabobs, only mine is cheap plastic. It tends to shred the part at the bottom, which is how I ended up with the tropical fruit leather I’ll talk about in a minute.

Again, like the apple doohicky, i just cut these slinkies in half.

And for mangoes, I used one of these gizmos to cut out the stone and slice it in half. Then, I peeled and diced each half. (That dice in the rind and peel them out technique–it wasted some mango, so I had to scoop it out and make some weird mango smears. No wasting mangoes in my house!)

For the strawberries and plantains, I used my handy chef’s knife to cut it into slices. The bananas, some I sliced, but then I decided to let them naturally divide into thirds.

For the fruit leathers, I used my handy dandy blender and my so-so immersion blender.

And last, but certainly not least, I used my Foodsaver to pack it all up.

I didn’t keep track of how long everything took to dry, I was just constantly trading out fruits over a period of 6 days or so.

After smelling the cinnamony apples drying away in the dehydrator, it gave me an inspiration to make some spiced apple leather out of the weird little pieces that ended up not being perfect rings or half-rings.

I gathered all those apple bits into a small pot (some still had bits of skin, but I don’t mind that), added some of that citrus bath, and cooked on low until the apple started to break down. I gave the whole thing a healthy sprinkle of cinnamon, cloves, and allspice. When it was mostly done, I used my immersion blender to break down the last few big pieces. There were still some chunks in there, but I don’t mind that either. Chunky applesauce is best, sort of like chunky mashed potatoes. I poured the mixture into one of those fruit roll trays that I bought as an accessory for my dehydrator.

As I mentioned above, I also ended up with some weird mushy pineapple because of the thingamabob not quite cutting through the bottom of the pineapple (even though I sliced it off).

I plopped the pineapple and some of its juice in the blender and whirred it up until it was almost smooth. It was too runny, so I added a banana. Then it was a perfect consistency for leather, kind of like a creamy soup. When I tasted it, I thought it could use some coconut–of course, it’s a perfect combo! So I tossed that in for a blend as well. It ended up having little flecks of coconut in it, which I thought was genius. I also poured that into a fruit roll tray and popped it into the dehydrator.

So, after days and days of drying, here’s what I ended up with:

If you have a keen eye, you’ll notice that I’ve left off the plantains. Well, they were just weird. I have a container of them still sitting on the counter, and I’m not quite sure what to do with them. Since I decided to dry green ones instead of ripe ones, I thought maybe they’d turn out like potato chips. But no such luck. I’m still figuring out what might work to make these less gross and more useful.

My planning was off, so there was no “one big pile” of fresh fruits to take a picture of, only a rotating pile that grew and shrank as I realized I hadn’t purchased enough the first few rounds. But, this is the after, with fruit and the nuts and seeds I added to the mix. 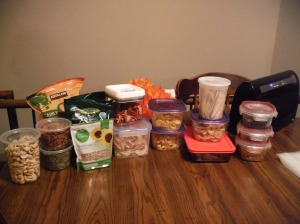 My partner was very helpful in prepping, and agreed to help me organize my snacks into rations. After all, he’s going to be through-hiking the Long Trail later this year, so I’ll be helping him out with food prep for his training hikes and the big one.

After I knew how much I had of everything, I started dreaming up the combinations that I wanted, and then calculating the nutritional information to see what would make sense. Here are the combinations I came up with:

I don’t know what the nutritionals look like for the leathers, since I didn’t measure anything.

We packaged up all of the snacks into baggies and laid out the spread. After counting out what I had, it seemed like the best option was to bundle five servings at a time, or about two days’ worth of breakfast fruits and snacks.

Then it was Foodsaver time!

I found some resealable off-brand Foodsaver bags at Sportsman’s Warehouse, and I thought that would be a great idea, that way, I can carry these over between days if I don’t eat everything in a particular bag in a two-day time frame.

The Foodsaver got a real workout, and even overheated on us twice (we will change up the assembly line process next time). In the end, I had 16 sealed bags for the trip (32 days), plus a bag of a few leftovers and my “miscellaneous bag” of fruits that were left over after weighing everything out. This will be a part of my train food. 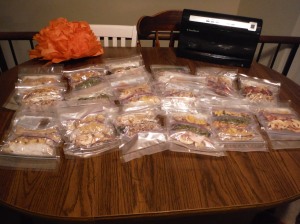 Now that everything’s sealed up, I’ve taken away the temptation of dried mangoes and strawberries that were literally calling my name from the counter top.

The whole family is into the dried fruit, so it’s something we plan to do more often than just when we’re taking trips. It’ll help with the abundance that we tend to bring home from our Costco trips.