I’ve been to the Cincinnati Museum Center a few time, just recently to visit their Mummies exhibit—which was amazing. But I’d never been there at night, and the acoustics made every noise echo off of the enormous domed ceiling.

Because I was so eager to get started on my journey, I talked my partner into leaving early, and so we’d got to the train station at midnight. My train wasn’t scheduled to leave until 1:23 a.m. And then we found out it was running an hour late. I have a great family—they were such good sports about the late night, and then the 90-minute drive back home. 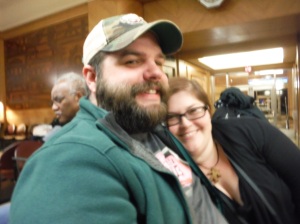 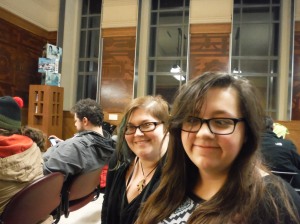 I learned later that there’d been some mechanical issues with the train en route from Washington, D.C. We pulled out sometime after 2:15 a.m.

At first, I had a hard time resting (since I drank caffeine while waiting for the train), and then when I could sleep, every time someone walked by me, I woke up. Even with the cushy reclining seat, I couldn’t get comfortable.

And when the sun rose over the Indiana fields, I knew I was up for the day. Lucky for me, the coffee in my thermos was still hot from 9 p.m. the night before. So I wrote while plenty of people slept on all around me and others (like my neighbor) went off to the dining car for breakfast and, I’m sure, gallons and gallons of coffee.

The best part of Indiana–windmill farms! You don’t get as close to them on the train as you do on the highway, but they always have some kind of hypnotic effect on me.

At some point between Lafayette and Chicago, I got to know my neighbor, Tamara, who was traveling from Washington, D.C. back home to near Roseville, CA, after a visit with her son. We talked about life’s vices and sorrows, and had a lot in common for two people who have lived very different lives separated by thousands of miles and a couple of decades.

We talked about the impact that the death of loved ones has had on our lives, and how we both found ways to keep grief from running the way that we live out the rest of our years. It sounds like a depressing conversation if you aren’t comfortable with death, but it wasn’t for either of us. Now that we’ve both had the experience of seeing that major transition that we will all someday face, our sense of what it means to be alive has been forever changed.

On the train, I also met a Venezuelan cheese maker who owns a shop in Cincinnati. He’d overheard me telling a guy I met at boarding about my upcoming adventures with the buffalo (I don’t know his name, but I do know he went to Europe and decided to backpack for two years before returning to the States).

Eduardo was curious about whether we’d make things out of the bison cheeks, whether we could make sweetbreads out of the tonsils as with sheep, and what we might do with the major organs. And I was, of course, interested in his cheese! I’ll be visiting his shop when I get back home. Not just to eat cheese, but to get a little more detail on how to make a plantain dish that his grandma used to make with green plantains, a shred that she could prepare like vaca vieja.

Despite the late start, we got into Chicago early, which meant that I had an extra hour to kill before my next train. I thought briefly about upgrading to a sleeper, but balked at the price, and instead wandered the station, pushing a cart load of 70 lbs., writing, eating, and people watching to kill the time since there didn’t seem to be a good place to curl up and sleep. Plus it was freezing no matter where I went.

When I finally went to the boarding gate and 45 minutes before the train was supposed to depart, I started reconsidering the upgrade to the sleeper car. I wrestled with the cost–an extra $464 that would more than triple my total ticket price. The train was scheduled to leave at 2:15 p.m. Again, the train was running late, so the boarding would have to wait. When the train rolled in at 2:17, I made an impulsive decision to run to the ticket counter and upgrade. 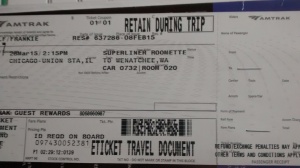 The first class lounge was amazing—and warm! If only I’d have upgraded 5 hours before, I could have curled up and passed out in an oversized leather chair, eaten free snacks, and had someone look after my luggage for me if I wanted to wander the station. So really, I got to enjoy being in the VIP lounge for 15 minutes before we boarded the train. So I just watched people while I enjoyed my first experience as a first class traveler. Yet another unknown in this journey…